Get ready to fall in love with this amazing hideaway in the hills! Enjoy your morning cup or evening glass as you take in the views from this Walter S. White gem that's ...

Located in the coveted Bird Streets off the Sunset Strip, 9233 Swallow Drive is a bespoke, contemporary masterpiece, lending thoughtful, organically-inspired design that ...

Spectacular single-story Zen inspired Ranch home nestled in The Oaks. First time on the market this peaceful hideaway has been thoughtfully and creatively re-envisioned f...

Offered for the first time in 15 years: 8724 St Ives drive, the former residence of legendary photographer Herb Ritts is hidden away on a secluded cul-de-sac in the hills...

A storied Hollywood Hills sanctuary, peaceful and private but close to everything. Located in the historic Hollywood Heights enclave, this unique Pre-Craftsman home stand...

Nestled amidst the Bird Streets overlooking the famed Sunset Strip is this contemporary hideaway with great curb appeal, drought-tolerant landscaping, and sweeping views ...

Welcome to "Oasis HH", a single-level contemporary marvel on a roughly half-acre flat lot on one of the most desirable streets in Outpost Estates. Walk over water into an...

This is your opportunity to live in the Hollywood Hills! This spacious 2,332 square foot 2-story home features 3 bedrooms, 2.5 bathrooms and is nestled in the charming a...

Great opportunity to own a charming 3 bed/2.5 bath hideaway in the idyllic Hollywood Hills. This light-filled 1990 home is a cozy abode for entertaining on the main floor...

The Samuel and Bertha Skolnik House, 1950-1952. R.M. Schindler, Architect. "The house is essentially a carousel, an open space with a merry-go-round in the middle," wrote...

The information being provided by CARETS (CLAW, CRISNet MLS, DAMLS, CRMLS, i-Tech MLS, and/or VCRDS)is for the visitor's personal, non-commercial use and may not be used for any purpose other than to identifyprospective properties visitor may be interested in purchasing.Any information relating to a property referenced on this web site comes from the Internet Data Exchange (IDX)program of CARETS. This web site may reference real estate listing(s) held by a brokerage firm other than thebroker and/or agent who owns this web site.The accuracy of all information, regardless of source, including but not limited to square footages and lot sizes, isdeemed reliable but not guaranteed and should be personally verified through personal inspection by and/or withthe appropriate professionals. The data contained herein is copyrighted by CARETS, CLAW, CRISNet MLS,DAMLS, CRMLS, i-Tech MLS and/or VCRDS and is protected by all applicable copyright laws. Any disseminationof this information is in violation of copyright laws and is strictly prohibited.CARETS, California Real Estate Technology Services, is a consolidated MLS property listing data feed comprisedof CLAW (Combined LA/Westside MLS), CRISNet MLS (Southland Regional AOR), DAMLS (Desert Area MLS),CRMLS (California Regional MLS), i-Tech MLS (Glendale AOR/Pasadena Foothills AOR) and VCRDS (VenturaCounty Regional Data Share).

Hollywood Hills is an affluent and scenic collection of residential neighborhoods spread out over several canyons on the southern slope of the Santa Monica Mountains. There is an abundance of parks, protected open spaces, bike lanes, and trail networks, providing plenty of places to hike, bike, jog, and/or exercise dogs. These areas include some of the best outdoor excursions in Los Angeles County, including Runyon Canyon, Lake Hollywood Park, and Griffith Park. 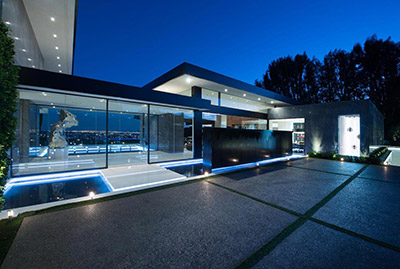 The Hollywood Hills is known for stunning luxury homes and upscale apartments with canyon, city, and/or coastal views. Some homes are perched out over the slopes on the hillsides. A diverse range of architectural styles is featured in The Hollywood Hills, including Mid-Century Modern, California Modern, Bungalow, Mediterranean, Spanish Colonial Revival, Tudor Revival, and French Normandy.

Sunset Strip is one of the largest areas of the Hollywood Hills West area, with the greatest variety of restaurants, bars, music clubs, and comedy clubs. The nightlife is internationally infamous. Sunset Strip is a term for both the famous commercial drag along Sunset Boulevard as well as the neighborhood above the boulevard filled with luxurious homes.

In the middle of The Outpost Estates neighborhood is arguably the crown jewel of the Hollywood Hills, the enduring Hollywood Bowl, a historic outdoor music venue and home to L.A. Philharmonic’s summer concerts. The Jerome C. Daniel Overlook is one of LA’s best viewpoints on a bluff right above the Hollywood Bowl.

Right below Outpost Estates and right above the Hollywood & Highland Center, which offers over 70 different shops, is the Hollywood Heights neighborhood. This is where the “secret stairs” of Los Angeles are located: public stairways built in the 1920s and 30s to provide people quick access to-and-from streetcar lines.

The Oaks neighborhood sits between Beachwood Canyon and Los Feliz Estates. Within The Oaks is the small, exclusive, gated community of Valley Oak Drive. 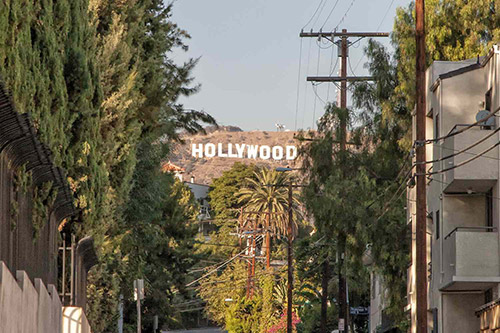 In Hollywood Hills (East), Beachwood Village sits right below the Hollywood Sign, one mile up Beachwood Drive from Franklin Avenue. Just over the ridge from Beachwood Canyon, is Lake Hollywood Park and Hollywood Reservoir. Lake Hollywood Park is a dog-friendly open space with grass and picnic tables. The quiet tree-lined reservoir loop makes it an excellent place to jog, walk, or ride a bike.

The Magic Castle is a clubhouse for the Academy of Magical Arts, a restaurant, and a nightclub. Admittance is members-only and guests by invitation. Right above The Magic Castle is one of the most notable landmarks in town, Yamashiro Historic District. The property includes gardens, a replica of a 17th-century palace, a 600-year old pagoda imported from Japan, and a restaurant. It has appeared in the movies Memoirs of a Geisha, Gone in 60 Seconds, Blind Date, and Sayonara.

Cruise up Canyon Drive from Franklin Avenue to the lesser-known entrance to Griffith Park in Bronson Canyon. Griffith Park covers 4,210 acres and is the 11th largest municipal park in the United States. It’s also the biggest park with an urban wilderness area. There are 53 miles of trails for biking, hiking and horseback riding. Griffith Park allows various recreational activities, such as swimming, golfing, soccer and tennis. 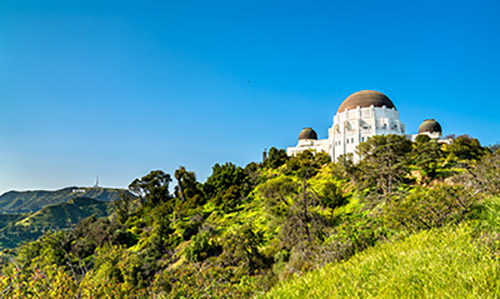 The Greek Theatre is an outdoor amphitheater in Griffith Park. At Griffith Observatory, there are telescopes available to the public at night, as well as stationary binoculars to view the city. Other features include Los Angeles Equestrian Center, Los Angeles Zoo, golf courses, the Autry Museum of the American West, and the Griffith Merry-Go-Round. Popular annual events include the Shakespeare Company's Griffith Park Festival and the Annual Griffith Park Sidecar Rally. 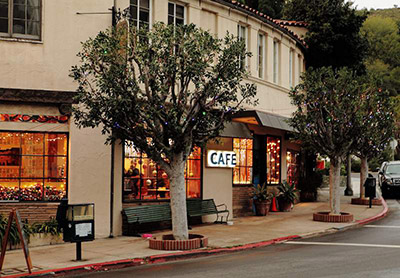 Musso & Frank Grill is located at the bottom of the Hollywood Hills, and has been serving the area since 1919, making it the oldest restaurant in Hollywood.

The nightlife scene that serves the Hollywood Hills never slows down with its wide array of clubs and lounges. One of the most popular clubs to try is Avalon Hollywood. Other area favorites include The Colony and Playhouse.

The Hollywood Farmers Market at the corner of Hollywood Boulevard and Ivar Street occurs every Saturday from 8 a.m. to 1 p.m., rain or shine, with over 160 vendors and local farmers.

Our website features the best Hollywood Hills, CA real estate search for homes, condos, land, & more. It is the only site you will ever need! It is easy-to-use and updated by the official Realtor®’s database every 15 minutes.

You can save searches, and get daily email alerts of new listings, price changes, sold data, and market reports. Our interactive map search allows you to view properties on a map or refine your search by drawing the boundaries around the area you desire.

Considering selling or refinancing your home? Get an INSTANT property valuation now!

Contact us today to find out how we can be of assistance to you! 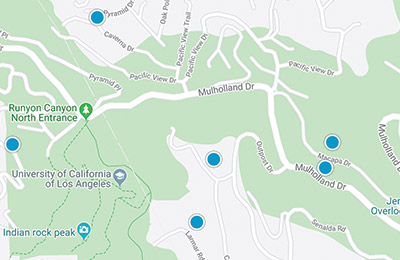